The two Team Dynamics run Hondas looked all but certain to take a 1-2 finish from the second race at Oulton Park until the final turns of the final lap, when both cars went sliding into the Lodge gravel trap.

Gordon Shedden had controlled the race easily from pole position. The Scot had held off the chasing pack through two safety car restarts, and in the final three lap sprint only his teammate Matt Neal was able to trouble the leader.

On a slippery track Neal locked the brakes approaching the Island Hairpin, sliding into the back-right corner of the no.52 car ahead. The contact put Shedden into a slide around the corner, but as Neal lifted noticeably to avoid further contact – and you might think protect the team's position – Shedden gathered the car together, and the status quo was maintained, though now third placed Jason Plato had gained time on the two leaders.

The 1-2 was back on, but Neal locked up again braking for Lodge on the final lap and was a passenger as the two Honda Racing Team entries collided and glided into the gravel on the outside of the right hander. A distraught Neal was left stranded, nosed into the tyre wall, while Shedden skittered clear to cross the line in sixth place.

Plato was the willing, if not joyful, beneficiary still critical of the advantage the turbocharged Hondas had over his Silverline Chevrolet.

Neal had powered past twice during the course of the race, relying simply on straight line speed to second – the move only necessary twice because Neal slide very wide at the hairpin – in hindsight an indication of how the race would end. Neal's drive was one of the highlights of the race, fighting to the top, passing the lower and middle part of the top ten with ease – helped in part by the lap one safety car brought out by Jeff Smith's repaired car going off at Cascades.

Another charger was Rob Collard. With the damp conditions from race one lingering for the start of race two, the start of the rear-wheel drive cars was likely to move the WSR pair from their third row starting spots. That possibility was clearly no secret as James Nash and Alex MacDowall closed ranks to block the route through the middle on the run down to Old Hall.

The BMWs' races were held hostage by the weather. While the front-wheel drive cars could run slick tyres on the front and wets on the rear the BMWs had to opt for wets under all four corners, and as the track dried after the early laps both Collard and Nick Foster drifted back through the order, the latter falling all the way out of the top ten after six laps. 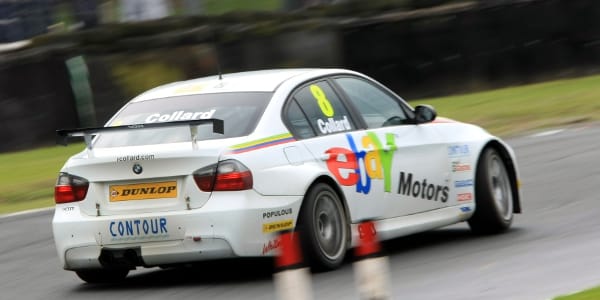 In wet conditions Rob Collard charged through to second in the final laps, though a penalty put him back to third

Soon after the rain began to fall again, and the BMWs started to float to the top of the field again. Collard's lap times were nearly 1.5 seconds better than those ahead, and passed Alex MacDowall for sixth on the entry to the Knickerbrook chicane to start his recovery.

The second safety car – caused by John George beaching his Tech–Speed Cruze in the Lodge gravel – allowed Collard to gain the ground to launch a final assault, passing Andrew Jordan and James Nash on successive laps to end the race, and gaining two free places thanks to the Honda nightmare to pick up second place on track.

However, a post race decision gave Collard a one second penalty – just enough to push him back to third behind Nash, who also took back the championship lead, leapfroggring Matt Neal to head a tighly packed top four in points.

Jordan held on in fourth ahead of MacDowall. Behind Shedden Paul O'Neill, Nick Foster, Mat Jackson and Tom Chilton completed the top ten, the Team Aon driver having passed Lea Wood in the final flurry of laps after the safety car pulled in.

Tony Gilham and Dave Newsham had also figured in the top ten battle early in the race. Gilham was forced to retire after acquiring hefty front end damage on the first restart, while Newsham retired with a technical problem after running as high as seventh as he continues his first race weekend with Special Tuning Racing

Rob Austin – another rear-wheel drive man in his NGTC Audi was a respectable twelfth, the best finish for a full NGTC spec car so far this year. Tom Onslow–Cole, running on slicks all race for AmD Milltek Racing finished 16th – the final man on the lead lap.