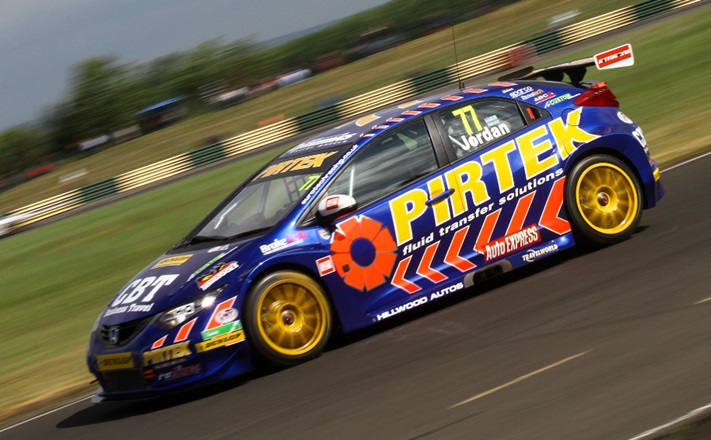 Andrew Jordan was quick out of the blocks in the first practice session for the fifth BTCC round at Croft, beating Jason Plato by a narrow 0.072s.

The Oulton Park winners moved to the top of the times before and after a stoppage to remove debris from the circuit at the halfway stage of the 40-minute session, Jordan just popping up to the head of the timesheets prior to the red flag being shown with a 1m25.378s effort.

Plato moved up to the front early on before being demoted to fourth place in the second half of the session once action resumed, Colin Turkington the man upholding BMW honours to go second for much of the session.

Plato then upped his game in the closing minutes, moving up to third spot before improving further to second place, just splitting the 0.103s gap between his Honda and BMW rivals Jordan and Turkington who rounded out the first practice top three.

Fourth was an impressive Tom Onslow-Cole in Team HARD‘s Volkswagen Passat CC, the top five being rounded out by Rob Collard who cemented a solid start overall to the weekend for the eBay Motors squad.

Behind them, the Honda Yuasa Racing duo of Gordon Shedden and Matt Neal had a somewhat quiet session en route to sixth and seventh place, Neal still carrying the same burden of maximum ballast in his Civic for leading the championship by four points from Jordan.

10 rounded out by the second Triple Eight MG6 of Sam Tordoff.

Mat Jackson had initially been the man on top of the times as drivers played a cautious start to practice, eventually slipping down to 17th place ahead of Will Bratt and his fellow Motorbase team-mate Michael Caine who makes a one-off appearance in the third NGTC Ford Focus for David Bartrum‘s squad.