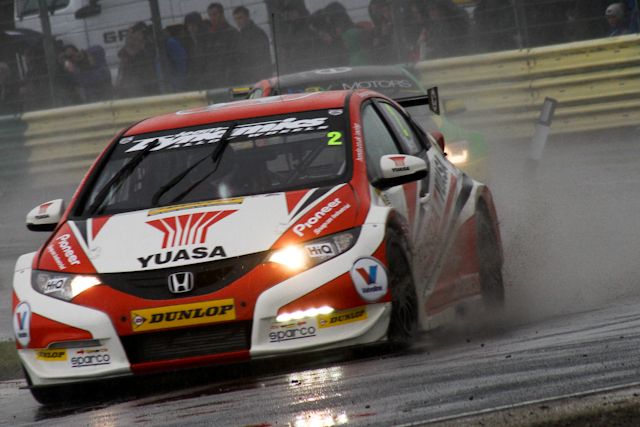 Championship leader Matt Neal will head into the summer break of the BTCC season with an extended cushion after fending off Colin Turkington in a very wet reverse-grid third race at Croft.

The triple champion moved to the front of the field after a treacherous first couple of laps following a deluge prior to the race, before denying Turkington a hat-trick in North Yorkshire by a slender margin of just 0.631s despite an edgy final lap for the Honda driver.

Adam Morgan started the race from pole position, but he was beaten into the first corner by the BMW of Nick Foster, Rob Collard‘s similar car emerging in third place. Collard however soon latter dropped back after contact with Gordon Shedden into the second part of the Complex, the tricky opening tour being led by the other eBay Motors car of Foster, while their team-mate and double winner from the day, Turkington, surged through to fourth place after a mighty start and opening lap.

The second lap was one Morgan would rather forget, the Ciceley Racing man losing out to Neal at Tower bend before spinning off the road at Sunny In, joined off the road briefly by the second works Honda of Shedden who re-joined in the top seven.

The off promoted Turkington to third, while Neal and the Irishman chased after leader Foster. The Honda Yuasa Racing driver then swiftly took the race lead, Turkington moving by his team-mate in much braver fashion heading through the Jim Clark Esses, surviving a slight brush with his fellow BMW man to move into second.

Try as he might however, the 2009 champion could not quite get close enough to challenge Neal for the win, Neal winning the third and final race of the day despite running wide at Tower on the final lap as he struggled for grip in the worsening conditions.

“I’m over the moon, it just It was a relief just to get to the end of it”, said Neal after the race. “The rain was coming harder and the track was getting more slippery so it was hard to hang on. It’s always nice to win and see that chequered flag first.”

Third place went to Andrew Jordan who had fought his way up to fourth place initially before pulling of a super move around the outside of Foster’s BMW through Tower. The Eurotech Honda kept closing on the leaders with a sequence of quick laps, but a mistake that saw him drift onto the grass at Tower dropped him to a safe third.

Shedden put on a late sprint to move by Foster at the Esses and then Dave Newsham in the dying stages, the Speedworks Toyota man driving a fantastic race to fifth place by the flag.

The KX Momentum Racing MGs recovered from their failed tyre gamble in race two to slice from 20th and 21th to sixth and seventh places, Jason Plato and Sam Tordoff keeping their noses clean as they forged through ahead of Foster, Aron Smith and Jeff Smith to round out the top 10, Tom Onslow-Cole another one of their victims before he slipped to 12th.

In the Jack Sears Trophy, Lea Wood finally got to celebrate a victory in a race of attrition in the class, James Kaye finishing three laps down despite going off the circuit twice in the AmDTuning.com Volkswagen Golf, while Jake Hill was removed from the race following an incident at the hairpin involving Dan Welch in the Proton.

The win sees Neal extend his championship lead now to 19 points over Jordan, Plato lying a further 27 behind in third ahead of Shedden and the Croft sensation Turkington now lying just 40 points off of series leader Neal.