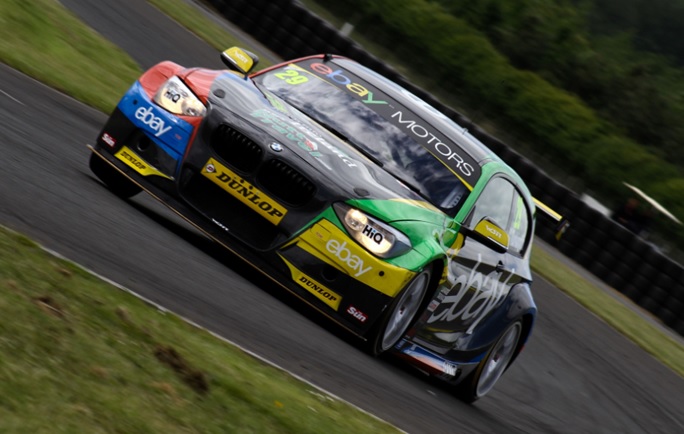 Jason Plato looked to be heading for pole position at Croft for the BTCC’s fifth round of the season, but a last-gasp effort from Colin Turkington saw the BMW driver snatch the first pole position of his comeback season.

The pair were two of several drivers that held the number one spot during the 30-minute session, Turkington coming up with the goods on his final lap of the session just after qualifying was restarted due to an accident for Joe Girling at the turn three chicane.

Neal responded to smash his own 2012 pole position time with a 1m24.630s effort, 0.196s quicker than his Honda Civic rival, as Gordon Shedden soon made it a Honda 1-2-3 after a messy start to the session that saw him first save a huge sideways moment at Sunny, before scattering photographers at the Complex moments later as he planted his car into the tyre wall.

Honda’s joy was soon short-lived however, as Oulton double-winner Plato looked to make it two out of two poles in a row by leaping all of them with a time good enough to beat Neal by a mere 0.017s, a time only troubled by Shedden in the final 10 minutes of the session.

The Triple Eight MG6 driver headed into the final five minutes still on top, until the session was red-flagged when Girling – returning to the series after missing Oulton Park through illness – speared his Chevrolet Cruze into the barriers at the exit of the quick first chicane.

After the clean-up, drivers had just three minutes to make a difference, and out of nowhere it was the eBay Motors BMW 125i of Turkington who pulled out the best lap of all, stunning the field with a 1m24.485s lap to snatch his and the new machine’s first pole of the season ahead of Plato and Neal, the latter unable to improve on the session restart having run out of fresh tires.

Twice in the closing stages Shedden went fastest overall in the first two sectors of the North Yorkshire circuit, but both times he could not improve in the final twisty section, the reigning champion starting fourth ahead of Jordan, while Rob Collard qualified sixth to prove WSR have a quick BMW at Croft by securing his best starting spot of the season.

Frank Wrathall managed to claw himself up to seventh place ahead of Sam Tordoff, the second MG having survived a trip through the first corner gravel trap to qualify eighth ahead of Tom Onslow-Cole, while a sterling and spirited repair job by Ciceley Racing was rewarded with 10th place by Adam Morgan after his earlier off in the afternoon.

Jack Sears Trophy honours went to Vauxhall’s Lea Wood ahead of the excelling Jake Hill, Wood claiming the class ‘pole’ by 0.462s in 22nd place overall, David Nye right behind them as the third S2000 car in his Welch Motorsport Ford Focus.