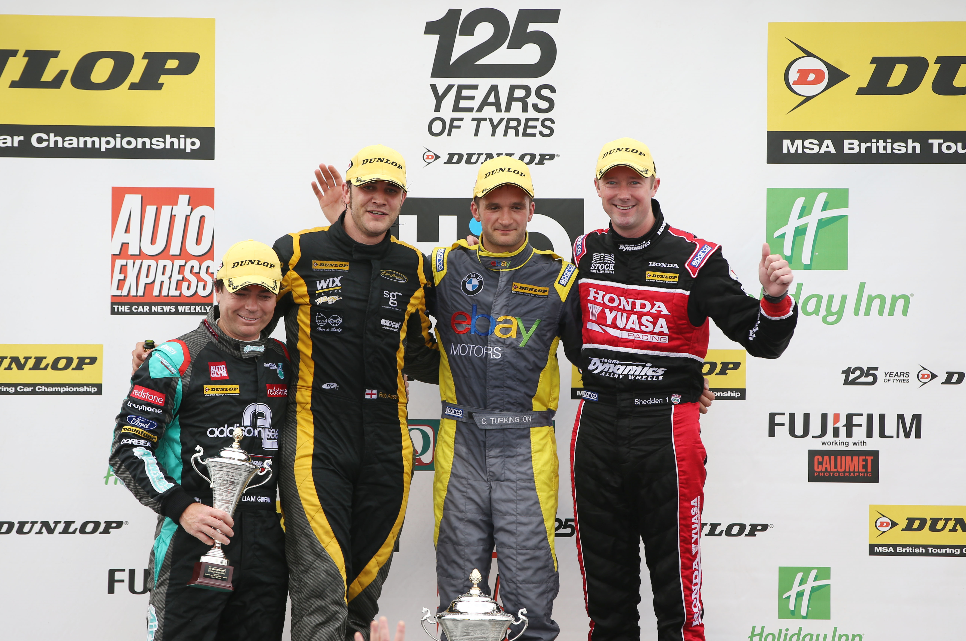 Colin Turkington once again was untouchable in round 20 of the 2013 Dunlop MSA British Touring Car Championship, claiming a lights-to-flag victory in the second Knockhill race of the day.

In a repeat of Croft in late July, the Irishman doubled up to claim his fifth win of the year after making a lightning getaway from the pole position, closing the gap further in the championship.

While Turkington bolted as the lights went out, Rob Austin also took advantage of the rear-wheel drive Audi’s starting ability to grab second place as he squeezed ahead of Gordon Shedden into the first corner, Shedden unable to find a way back by the WIX Racing man over the following two laps before Austin edged away.

Turkington romped away to a four-second lead that eventually dwindled to just 1.8s by the flag, his win seeing him now close to just 13 points behind the series leader, Matt Neal, who only has a 10-point gap to tam-mate Shedden as the Scot stole second in the points from Andrew Jordan.

Behind Austin and Shedden, Jason Plato fell down the order, first losing out to Rob Collard’s eBay Motors BMW before becoming easy prey for the other two Honda Civics of Neal and Jordan.

Jordan staged his own chase of Neal throughout the 24 lap encounter, tapping the Yuasa Racing driver under braking for the hairpin on lap seven before spending the rest of the race hunting – unsuccessfully – for a way by the points leader.

Both caught and passed Plato after Neal got a better run into the hairpin, out-braking the MG at the tight right-hander before Jordan swiftly followed through as Plato was delayed.

Behind Collard, Neal and Jordan, seventh was all Plato could muster ahead of his lonesome team-mate Sam Tordoff in a distant eighth, Mat Jackson and Dave Newsham rounding out the top 10.

The race was over before it even begun for the second Airwaves Ford of Jackson’s team-mate Aron Smith, the Irishman having to be pushed off the grid as his car remained stationary when the lights went out.

Adam Morgan meanwhile was denied a top five result by a driveshaft problem that forced him to retire, while Paul O’Neill was a non-starter from the race after his incident with Nick Foster in race one that left his Insignia in the barriers.

A great battle outside the top 10 brewed between Frank Wrathall, Dan Welch and Tom Onslow-Cole, Welch’s Proton eventually coming out on top in the three-way dice.

The Jack Sears Trophy was initially an entertaining fight between Liam Griffin and Lea Wood, the Vauxhall man pressuring his Motorbase Ford rival for many laps before interloper Warren Scott eventually split the pair and allowed Griffin some breathing space.

David Nye suffered a puncture and an off at the John R Weir chicane which eliminated the Welch Motorsport driver from the action, while Aiden Moffat also saw his race come to an early end at the same corner when the left-front suspension on his Finesse Motorsport Chevrolet Cruze collapsed upon impact with the kerbing.

The top six drivers will be reversed to make up the starting grid for round 21, meaning Jordan starts on pole for the final race which gets underway at 17:05, and you can follow all the happenings on thecheckeredflag.co.uk and on Twitter through tcfBTCC.