PREVIEW: BTCC Battle Rolls On To The Rock’ 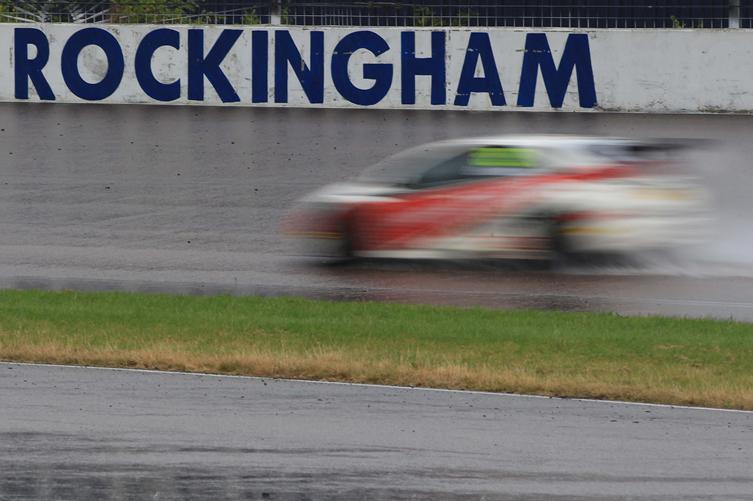 The 2013 Dunlop MSA British Touring Car Championship remains as close as ever heading South to Rockingham for the eighth meeting of the season, with a new title contender now entering the squabble for Rockingham’s 10-year anniversary since it first greeted BTCC…

Just six points separate the lead duo of Matt Neal and Andrew Jordan in the champiosnhip heading to the famous Speedway in Corby, Jordan continuing to trim the gap to his Honda rival after a fourth win of the season in the final race last time out at Knockhill.

While the championship leaders left Scotland satisfied after a solid points-collecting weekend, the star of the show proved to be Irishman Colin Turkington, the eBay Motors man claiming two wins in Fife to trim to lead deficit and thrust himself firmly into the chase for a second title on his comeback campaign.

Turkington would have come into Rockingham just 17 points behind Neal – having once been 40 behind after Croft – but an exclusion from fourth place for overboosting on his BMW in race three leaves him now 30 points behind in fourth place, but looking in the best shape of all on the grid right now.

Turkington and WSR are on a purple patch (Photo: btcc.net)

The WSR squad have found the sweet spot with their new BMW 125i finally, Rob Collard‘s stellar weekend backing that up as he returned to the podium for the first time this season at Knockhill. The Rockingham circuit has often seen the BMWs feature towards the front towards the end of races, the very technical 1.94 mile circuit notoriously kind to those that look after their tyres.

Not short of overtaking at Rockingham

The Rockingham infield circuit is one of the favourites on the calendar for providing overtaking opportunities, the many long sweeps demanding a smooth style rather than a driver being too impatient on the loud pedal in order to achieve the best blast into the bend that follows.

The long turn one banking is a perfect place to set up the best passing scenario into Deene hairpin, the 180 degree left-hander seeing many late-braking lunges take place. Tarzan hairpin has also seen many a race-winning overtaking move, the wide exit allowing for many unique ways of doing so. 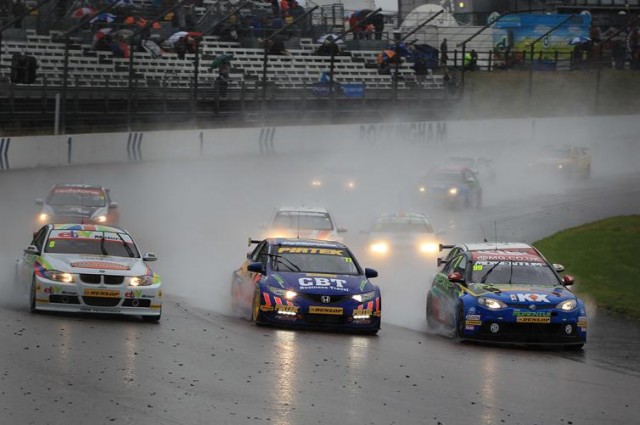 The 90 degree complex sequences allow for drivers to set up their rivals for a cut-back move, with traction very critical to a good lap – particularly towards the last tours of the race when rubber is wearing thin.

MG needing a change in fortune

Turkington is without a Rockingham win to his name thus far, but BMW do have success with Stephen Jelley and Mat Jackson in the past. Jason Plato meanwhile is the most successful Rockingham contender on the grid, with five wins to his name.

Plato desperately needs to add more to his name if he is to remain in the title hunt however, a very off-colour weekend in Scotland for MG KX Momentum Racing leaving their charge blunted and Plato 54 points from the championship lead after “very frustrating” weekend.

On his chances now, Plato says: “We dominated race one at [Rockingham] circuit last year and we have just got to think about winning some races.”

Indeed Plato did grab pole and a dominant race one victory last year, but that day was hit by another Rockingham feature – rain. The inagural Rockingham BTCC meeting saw a thunderstorm cause the evacuation of a grandstand, while meetings in 2008 and 2012 produced some classic sodden races which Neal would happily accept this year to cancel the penalty ballast headaches he is contending with for leading the field.

Honda always strong at the Rock

Gordon Shedden is another Rockingham specialist having picked up four wins since 2008, the same number as Honda Yuasa Racing team-mate Neal on a track that always has always suited Honda Civics of many shapes and sizes sice 2003. 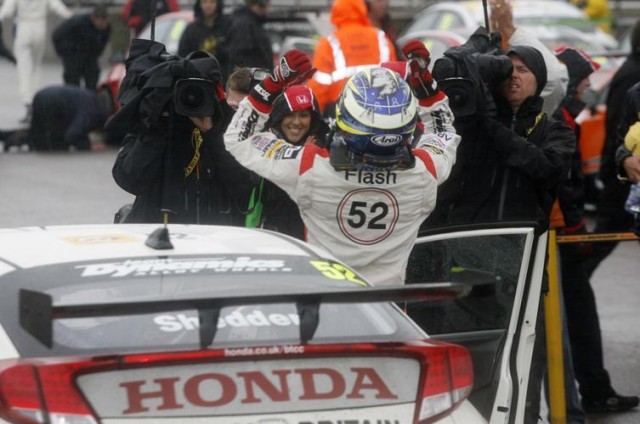 Shedden has always gone well at ‘The Rock’ (Photo: btcc.net)

Shedden could well have been close to leading the championship had a fiery exit not ended his Knockhill weekend on a low note, but he is firmly in the title hunt with three rounds to go and should be a contender for Rockingham victory, particularly with Neal still struggling on 45kg success ballast.

The ballast scenario is now forgotten to Jordan who joked that 36kg is becoming the car’s base weight having contended with it for so many events. ‘mr consistency’ of 2013 aiming for podium finishes as he appears quicker than main rival Neal on sheer qualifying pace alone, something that could prove critical in their title fight.

“A lot can happen over the final nine races”, pondered Jordan, a fan of the Rockingham circuit’s challenging sweeping corners. “I like some of the corners at Rockingham. It’s about finding that balance between pushing hard and scoring points all the time”.

Austin ready for that first win

Rockingham has been good for the underdogs in the past, Rob Austin and Frank Wrathall having come oh-so-close to wins in 2011. Austin should be in contention for that elusive maiden win this weekend after such a sensational escapade at Knockhill, a maiden pole and two podium finishes making him the star of the show in Scotland.

Dynojet‘s Wrathall and fellow Toyota Avensis driver, Speedworks’ Dave Newsham, will be hungry for something to finally cheer about after a tough season for the pair who are yet to add to their win tally in 2013.

Aron Smith was also one of the stars of the sodden show last season, leading much of race three in the wet conditions as he eventually finished fifth. Motorbase had a disappointing run at Knockhill, but the Rockingham circuit is one that the NGTC Focus has previously run at, offering some consolation as they hunt for a admirable set-up.

Jeff Smith will return to the series for Pirtek Racing after missing Knockhill, hoping for no repeat of his nasty accident on the damp banking last season, while Team HARD have had a big shake-up in their musical BTCC chairs line-up once again. 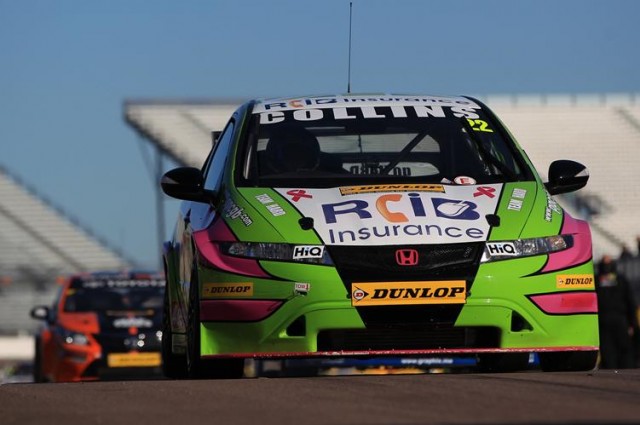 Howard Fuller returns to the BTCC at the circuit he made his series debut at last year, this year driving the Vauxhall Insignia Kieran Gallagher drove in Fife, while Jack Goff returns for the remainder of the season with his budget issues resolved.

The big news is that missing from Rockingham will be Tom Onslow-Cole, the team putting Volkswagen Cup racer Andy Wilmot in the VW Passat after their reasoning stated Onslow-Cole will test the car privately rather than during race weekends in preparation for a stronger 2014 challenge.

Andy Neate had one of his best BTCC experiences here last season with MG, and will return to the helm of his IP Tech Race Chevrolet Cruze which Mike Bushell debuted with at Knockhill carrying a more levelled boost performance.

Lea Wood will continue to lead the Jack Sears Trophy with 10 wins to his neam, leading by four triumphs after Liam Griffin was unlucky to miss out on a treble victory haul at Knockhill. A tiff with Gallagher in race three prevented the start of a mega fightback from the much-improved Motorbase driver, recently celebrating the birth of his and wife Clare’s third son.

Aiden Moffat‘s debut was a rough one in Knockhill, the 16-year-old hoping for a better weekend at Rockingham after engine problems and a suspension failure ruined his home round.

– You can keep up with all the news, race reports and general goings on from Rockingham with us on thecheckeredflag.co.uk, and follow live tweets during the races on our Twitter page @tcfBTCC.