As our seasonal look back at 2013 becomes a look forward over the twelve months 2014 that stretch before us all the band of www.theCheckeredFlag’s regular contributors point the finger at what they’ll be watching out for when racing begins this year (that’s sooner than you think). Their picks highlight the change of rules coming to Formula One, the revolution of Formula E, the marriage of ALMS and Grand-Am and some of the new faces in two-wheeled series.

Peter Allen – A new era for the WTCC
The World Touring Car Championship has been through a difficult couple of years, with Chevrolet dominating and then quitting the series, with a lack of factory-backed competition allowing Yvan Muller to claim an uncontested fourth title in 2013 in an RML-entered car. While the DTM goes from strength to strength and the British Touring Car Championship and V8 Supercars continue to be in rude health too, the WTCC will attempt to fight back in the touring car arena next year with new regulations aimed at making the cars faster and more aesthetically pleasing. Citroen join Honda and Lada in the manufacturer stakes, bringing rally legend Sebastien Loeb with them and hiring Muller and Argentine star Jose Maria Lopez to partner him. Rob Huff joins James Thompson at Lada, while a crop of RML-built Chevrolets with drivers including Toms Coronel and Chilton will make for a healthy grid of brand new cars and hopefully usher in a spectacular new era.

David Bean – Williams
Pastor Maldonado has been shipped off to Lotus, and the reliable Felipe Massa is his replacement. Mercedes will be providing the new specification engine, and Pat Symonds is putting his stamp on the technical department. Valtteri Bottas, the much talked about rookie who put in some impressive performances in 2013, is beginning his second season with the team.

There are plenty of reasons for Williams to be optimistic about 2014. And, whatever happens, next season cannot be much worse for the team than the one that has just finished. 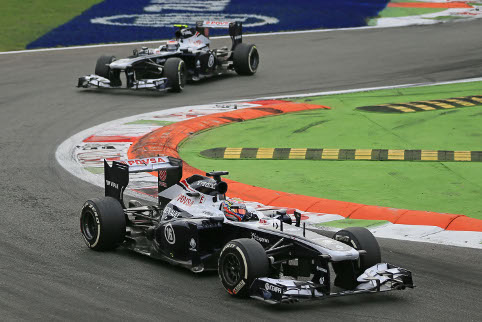 Can Williams step back up the grid in 2014 (Credit: Octane Photographic Ltd)

James Broomhead – United they stand
The TUDOR United SportsCar Championship. That’s the only answer and, helpfully, we’ll get our first glimpses of how America’s new united sports car front lines up before just about anything else this season. On paper the TUDOR Championship should be epic – huge grids containing mouthwatering lists of drivers, teams and machinery all on some of North America’s best tracks. Part of the intrigue ahead is to whether that potential promise is matched my the actual racing.

I obviously hope it does as that would give the world a sports car series every part the match for the WEC, but there are still hurdles to leap. The largest is how will the DeltaWing versus DP versus P2 balancing in the top class work out across the season. There have already been problems with the reworked DPs blowing tyres in testing at Daytona in November – though that issue seems to have been solved at this point. How the season develops will be thrilling to watch unfold.

James Charman – Hutchinson on The Mountain
After making his emotional return at the 2013 Macau Grand Prix, Ian Hutchinson proved that he had lost none of his pace in his 18 months on the sidelines through injury. Returning with the Milwaukee Yamaha team, Hutchy’s pace is unquestionable, but he will have to fight against the odds to take another victory at the Isle of Man TT in 2014. You have to go back to 2008 when a make other than Honda won a Superbike TT, and back to 2005 when a Yamaha rider took victory. Another name to look out for is Conor Cummins, who has signed with the works Honda team as he chases his first TT victory.

Alex Goldschmidt – The new formulae
There’s still a lot of fighting on track, even as 2014 is just around the corner, but there are just two things I feel need to mention in this instance. Formula One is going through a major change for next season, especially with new technical regulations. So be prepared for some events that may clearly shake up the current “apple cart” when the teams go to the first race at Melbourne and for part of the first season.

Formula E is a championship that has come onto my radar from both a writing and personal aspect, as the automotive industry and racing could very well benefit in the future from a 100% electric racing series. Just take into consideration who is on board – Andretti Autosport, Dragon Racing and e.dams, who are all taking this seriously. There’s no playing around here.

Joe Hudson – US sports cars United
The biggest thing to watch in 2014 has to be the TUDOR United SportsCar Championship. It is the first time in more than a decade that American endurance racing is undergoing this big a change and with the number of entry requests surpassing the number of grid places available, there will be no talk of small grids and unexciting racing – even if most of the grid will be in Porsches.

Dan Mason – F1’s new order
Formula 1 is being handed its latest extreme makeover, which could be the chance to revitalize the sport after what was seen as a tedious season thanks largely to its conservative style of recent Pirelli-focused years.

New V6 engines, altered aero packages and new Pirelli tyres will effectively hand everybody a clean sheet of paper, meaning the chance of mechanical failures will become less of a rarity as of the invincible-like reliability of recent times.

Mercedes are expected to be mightily competitive should they remedy their tyre troubles, while the driver line-ups are going through a similar change around, with Kevin Magnussen certainly one to watch out for.

Another to focus on will be the new machines heading to the World Touring Car Championship, with Citroen making their mark and bringing World Rally Championship royalty Sebastian Loeb to the tin-top party.

Simon Paice – The complete BTCC package
The whole BTCC package is shaping up for an intriguing year in 2014. The BTCC itself is in brilliant health, fully-subscribed, new cars, new drivers and the potential for now 5 series champion’s battling it out for the title.

In the supports, the Ginetta GT Supercup is once again attracting a field packed with top racers, while its little brother, the Ginetta Juniors, is set for another interesting year.

The Renault UK Clio Cup looks ready to kick off life with the fourth-gen Clio with another big, competitive field, while the Porsche Carrera Cup GB is hoping for a resurgence with its own new car.

The most intriguing championship to watch will be Formula Ford GB though, which looks like it will bounce back from a tough 2013 with bigger grids and more of the characteristic, all-action Formula Ford racing.

James Singleton – Rallycross World championship
There is so much happening in 2014 in motorsport in general, it’s difficult to know where to start. But along with the changes in F1 and LMP1 in the WEC, I’m looking forward to seeing how the first year of the new World Rallycross championship goes. Rallycross RX has been going from strength to strength recently, and after an excellent 2013, it has been granted World Championships status by the FIA. That’ll only bring increased competition and variety in the cars competing. I genuinely believe Rallycross (on both sides of the Atlantic) is heading back towards those 80’s glory years everyone remembers so fondly, and if so, it could soon eclipse the World Rally Championship in popularity.

Louis Suddaby – The best of British in MotoGP
British motorcycle racing is in excellent shape and 2014 could be one of the biggest years yet. For many, the intrigue will surround Cal Crutchlow’s effort to turn Ducati’s fortunes around but Bradley Smith may be the UK’s biggest podium contender in his second season with Tech 3. MotoGP also welcomes Scott Redding to the premier class and the youngster who was cruelly robbed of a chance to challenge for the Moto2 title will be one to watch on Honda’s new production racer.

The excitement doesn’t stop in the big league with reigning World Supersport Champion Sam Lowes now looking to conquer Moto2 while Gino Rea returns as a full-time rider after impressing as a wildcard this term. Britain’s long wait for another Grand Prix world champion may end in 2014 too with Danny Kent returning to Moto3, looking to follow the career path of Julian Simon among others by dropping a class to achieve success before coming back stronger. Kent will represent Husqvarna on their return to the paddock but he will essentially be riding a factory KTM and we know how potent a weapon that is.

By Paul Hensby
1 Mins read
Felipe Drugovich is perhaps one of the brightest young talents in junior formulae that does not have the support of a Formula 1 young driver programme.
Formula 1Formula 2