Triple Ginetta racing champion Tom Ingram will be the latest addition to the 2014 British Touring Car Championship grid, after completing a deal to race for Speedworks Motorsport for the coming season in a Toyota Avensis.

The 20-year-old dominated the BTCC-supporting Ginetta GT Supercup in 2013 on his way to clinching the title with an astounding 22 podiums and 11 wins from the 25 encounters, and will now step up to the BTCC with Speedworks after claiming a third car racing crown in four seasons.

A former member of the KX Akademy during which he was mentored by double BTCC champion Jason Plato, Ingram will now graduate to the main stage with Speedworks to drive a Toyota Avensis for a maiden campaign the youngster is eagerly anticipating, joining a grid that includes seven former champions.

“I’m hugely excited. To finally join the BTCC really is a dream come true for me – when I started out in karting more than 12 years ago, not for one second did I ever believe we would make it this far”, said Ingram, a BRDC Rising Star and MSA Academy member.

“It’s been a long winter trying to put everything together. The BTCC is a colossal leap financially – pretty much the cost of four years’ Ginetta racing all rolled into one! We had sponsorship leads that looked promising only to then fall through and there were times when I genuinely didn’t think it was going to happen, which was heart-breaking, to be truthful.

“Deadlines were getting closer and closer and not much headway was being made, but I’ve never given up on anything in my career before, and I wasn’t about to start now. Thankfully, I have two loyal sponsors in particular – SKYCIG and Hansford Sensors – who have stuck by me throughout, and their enduring support has been absolutely key.” 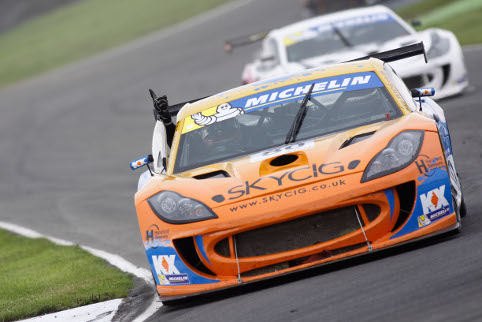 Due to test at Silverstone this week, Ingram contemplated his debut season ahead of him with high spirit, adding: “I’ll be racing with drivers I grew up watching on TV – heroes of mine.  There are some massive names in the championship, and that certainly won’t make for an easy year – but what a year it’s going to be.

“It will be a tremendous challenge and we need to remain realistic – it’s shaping up to be the toughest season in BTCC history, I’ll be up against a lot of seriously accomplished rivals and it will be my first year in a front-wheel-drive car.

“I’ve got a great team behind me in Speedworks. I went up to the factory last week and they seem like a really good bunch of guys, clearly very skilled and experienced and just as importantly, extremely passionate about what they do. There’s a real family atmosphere and they actually remind me a lot of JHR Developments, who I won the Ginetta GT Supercup with last year.”

Speedworks team principal Christian Dick commented: “Tom has stood out as one of the brightest young talents rising up through the ranks for a few years now.  He’s won the title in every car racing championship he’s entered, and off the track, he is extremely professional and always presents himself very well. All of us at Speedworks are incredibly proud and excited to have him on-board, and we will give him as much assistance as we can and everything he needs to feel relaxed and comfortable inside the car and get up-to-speed as quickly as possible.

After the most encouraging of their three BTCC seasons to date, Dick is optimistic of a strong 2014 campaign for Speedworks, adding: “We ended last season with quite a good package, so hopefully we can really hit the ground running straight away in the first round of 2014 at Brands Hatch. Obviously with the sheer number of high-quality drivers on the grid, it’s not going to be an easy season for anybody, but we are adopting a sensible approach and won’t be putting Tom under any pressure to go out there and deliver immediate results.

“We are looking forward with justifiable optimism, and confident in the knowledge that it’s truly a fantastic time to be a part of the BTCC.”

Tom Ingram Takes His First Pole Of 2019 in Snetterton

Tom Ingram – Oulton Park is a thrill ride from start to...