The Dunlop MSA British Touring Car Championship will always be the perennial motorsport series in the United Kingdom. New drivers, up and coming talent, household names including five BTCC champions add to the capacity 32 car grid in 2018 where 9 venues are to be visited and 30 hotly contested rounds will take place.

The BTCC will also celebrate its 60th Anniversary in 2018 and special events at each venue are to be announced throughout the year. Snetterton was the first to be involved in celebrations when it was advertised that it will host the ‘Diamond Double’ where the final race of the day will run twice the distance of a normal touring car race at the circuit.

One of the biggest shocks over the Winter break was the loss of elder statesman and three time Champion Gordon Shedden to the newly formed FIA WTCR presented by OSCARO series. Dan Cammish was the man chosen to fill the seat.

The former Porsche Carrera Cup GB Champion will pilot the new Honda Civic Type R FK8 for Halfords Yuasa Racing alongside Matt Neal. The duo topped the timesheets at Brands Hatch testing and this will certainly be a good omen for the development of the new FK8 Type R. This could also mean that it’s no contest for Dan in regards to the Jack Sears Trophy, eligible for drivers who have not scored a podium in the series.

The other big news before the season was the surprise parting of company between Team Shredded Wheat Racing with Gallagher and Mat Jackson. This was a sad end to a partnership of 8 years and 17 victories together.

Jackson had been announced as one of the drivers for the Motorbase squad until he allegedly made his position untenable due to an attempt for the second Team Dynamics seat vacated by Shedden. Mat’s Ford was taken by former Adrian Flux Subaru Racing driver James Cole.

Cole will be joined by Tom Chilton who signed from Power Maxed Racing and championship returnee Sam Tordoff in the new Ford Focus RS.

With new scenery for Chilton this year, he has already staked claim towards a title assault in 2018, whilst the 2016 BTCC runner up Sam Tordoff will aim to get back up to speed after a year away racing in the British GT Championship. James Cole will also be looking for more silverware after a breakthrough weekend at Rockingham last season where he scored his first pole position, podium and win at the first race of that weekend.

Adrian Flux Subaru Racing enter the new season with only three Subaru Levorg GT’s instead of the usual four, but they stick with familiar faces from 2017.

Ashley Sutton returns with the number one on his car and his ultimate aim would be to keep it there for 2019. However, he will also have to deal with being the number one target for every other driver in the championship, a prospect that certainly wouldn’t fluster the cool 24 year old.

Despite only two wins the past couple seasons in the series, Jason Plato edges ever closer to 100 wins overall in the BTCC. Whether he will retire before he has done so remains to be seen but 2018 provides him with another opportunity to notch up the three important victories towards the century target. The Levorg is certainly one of the most capable cars for this job.

The final Subaru is fielded by Josh Price under the Autoglym Academy Racing banner. He was getting quicker as the 2017 season progressed and this momentum should continue into 2018 where he can attempt to score more top ten finishes. 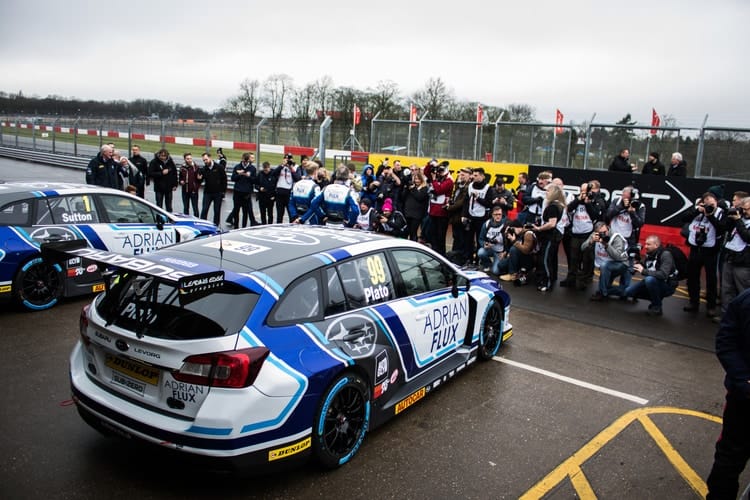 Team BMW retain Colin Turkington and Rob Collard for their assault on the series. Colin would have immediately put the disappointment of missing out on the drivers title last season behind him and started looking forward towards winning it this year. It’ll be hard to discount the Northern Irishman from taking his third title.

Collard returns after missing the final five races of 2017 due to injury, he’ll be hungry for more visits to the top step of the podium after only taking one victory last year at Thruxton.

Andrew Jordan also returns in a BMW with a striking new BMW Pirtek Racing livery to boot. The 2013 champion has been blighted by inconsistency and constant hardware change since the title win so hopefully a second season with the same team can settle him for better results.

Team Parker Racing secured the use of a BMW 125i M Sport from West Surrey Racing to be used by Stephen Jelley. After only scoring two points last season, this coup of acquiring a proven race winning vehicle could be the shot in the arm that the team and 35 year old needed to get more point scoring finishes.

Ran by Power Maxed TAG Racing, the Vauxhall Astra returns to the hands of 2017 Jack Sears Trophy winner Senna Proctor where he will be joined by Josh Cook who returns to the team where he started his BTCC career in 2015.

In a sophomore year for the Astra, lessons learnt during last season should hopefully get more pace out of the car and possibly cause a shock result here and there throughout 2018.

First season nerves were blown out of the water for HMS Racing and Rob Austin at the Donington Park media day test when their brand new Alfa Romeo Giulietta set the fastest time in the five hour test session. Rob hailed the Alfa to be the ‘Best ever package’ he’s ever had at the start of a season.

Media day testing usually has to be taken with a pinch of salt but the new Giulietta will certainly be an interesting watch for the legions of fans that Rob has in the BTCC.

Two teams will run the older Honda Civic Type R FK2 in 2018. Wix Racing with Eurotech return with a confident Jack Goff and an improving Brett Smith whilst BTC Norlin Racing welcome back Chris Smiley and open the door for a return to the BTCC for James Nash after seven years away from the series.

Matt Simpson and Simpson Racing leave Team Dynamics and will now race under the Eurotech banner in order to stay with the FK2 Type R model.

Brett Smith was dropped in at the deep end following the crash that severely injured his father Jeff Smith last season at Croft, but constant improvements throughout the year meant he got quicker and quicker until he was ultimately on the pace of his team mate by the time of the season finale at Brands Hatch.

The Toyota Avensis will only be represented by one driver in 2018 and Tom Ingram has been a man on the up in recent years. Speedworks Motorsport haven’t drastically altered the car from last season in the hope that whatever isn’t broken didn’t need to be fixed.

The trend of winning the very first race of the season at Brands Hatch has been Tingram’s own since 2016 and this Speedworks ethos of ‘evolution rather than revolution’ will ultimately decide whether this form will continue.

Oliphant joins a well drilled team in Ciceley Motorsport and recent years with Morgan proves that the début season for Tom could be quite fruitful. Another driver to watch in the Jack Sears Trophy.

Meanwhile Aiden Moffat will try and aim for more victories after his breakthrough season in 2017 with Laser Tools Racing, but whether he will be able to do this whilst also competing in the new TCR UK series will remain to be seen. However, this challenge doesn’t appear to be a problem for the likeable Scotsman.

AmD Tuning will run four drivers over two different cars in 2018 using the most successful NGTC car in the MG6 GT for Rory Butcher and Tom Boardman whilst also running the team’s familiar Audi S3 Saloon for débutant Sam Smelt and the retained Ollie Jackson. The latter hoping for better speed and hopefully a breakthrough podium in the BTCC after over a hundred starts.

Butcher akin to Brett Smith was also drafted in partway through the season to replace an injured driver, and both impressed enough to be given a chance for a full season in the series. Whether they can repay the faith that their respective teams have placed onto them will be interesting to follow as the season progresses.

Footage of the Volkswagen CC testing around Croft made it look like it could be a contender for a few top ten finishes in 2018 and in the hands of a capable driving team it can’t be put past them to achieve this.

The quartet of Jake Hill who stays with Tony Gilham’s outfit, Bobby Thompson who seriously impressed in testing at Donington Park, Michael Caine returning to the series after a handful of appearances over three years previously and the current Renault UK Clio Cup champion Mike Bushell who undeniably deserved a new opportunity in the BTCC after previous forays where he was unable to truly show his skill behind the wheel of a BTCC car.

This line-up could all be in with a shot for the Jack Sears Trophy and the vast wealth of motor racing knowledge that will be contained within the VW’s may certainly be helpful towards a rather consistent year. Something that will be welcomed by Team HARD.

All in all the 2018 Dunlop MSA British Touring Car Championship is shaping up to be another cracker of a season and it begins at Brands Hatch on 8 April and will be broadcast live on ITV4.

WATCH: Codemasters Discusses Past, Present and Future of...