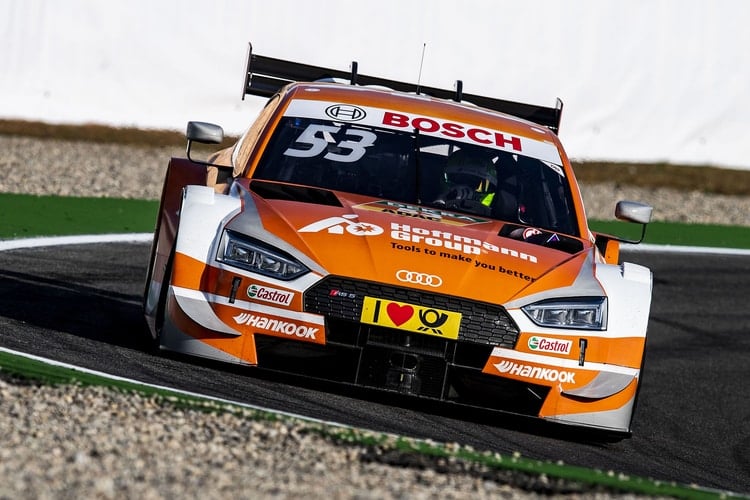 The Briton was three tenths faster than the next best car of Marco Wittmann, with Lucas Auer in third.

After some time to adjust to the track conditions, and return to the pits to make any amendments times started being put on the board.

However, the Spaniard was quickly displaced by yesterday’s race winner René Rast.

Augusto Farfus who had been showing strong pace yesterday, was running in second place and reduced the gap to Rast to 0.030 seconds.

Following a crash in practice, not able to go out and qualify, and being forced to retire from the race yesterday Wittmann put himself in fifth on his first run.

The BMW driver then bettered that on his next lap by going quickest.

Rast running as second fastest knows that he needs to take the maximum today if he is to claim the title. With Gary Paffett in ninth and Paul di Resta in fourteenth, the chances for the Audi driver may not be as unrealistic as they seem.

With just over thirteen minutes remaining in the session, Green went quickest by over four tenths to Wittmann.

On his next lap he further extended his advantage to go over half a second clear of second.

Team-mates Mike Rockenfeller and Robin Frijns slotted into third and fourth to make it four Audi’s in the top five.

Green continued to stretch his legs, to put himself almost a second ahead of Wittmann.

Nico Müller put himself into third but was over a second down on his stable-mate.

Having been displaced by Rockenfeller, and relegated to fourth Müller found more pace on his second run to go second still eight tenths away from the benchmark of Green.

The Audis of Müller, Rockenfeller, Frijns, Rast and Loïc Duval and BMW’s Bruno Spengler were the only cars on track as the rest of the field were in the pits.

With six minutes to go the field headed back out on track for their final runs.

Di Resta, was pushing too hard too soon and spun as he was leaving the pits.

There was improvements all around but nobody was able to challenge the time set by Green.

Wittmann got the closest to the Briton but was still three tenths down.

Rast was fourth with Edoardo Mortara in fifth.

Frijns was sixth, ahead of Farfus and Müller.

Second placed man in the champion di Resta was down in thirteenth.