Thruxton played host to rounds seven, eight and nine of the 2019 F4 British Championship certified by FIA – powered by Ford EcoBoost where the title battle greatly intensified. In case you missed anything, here’s a detailed, team-by-team summary of the weekend’s action in current championship order.

Double R Racing entered the weekend with two of their three drivers occupying the head of the drivers standings – Louis Foster led Sebastian Alvarez by 17-points with the pair holding an even bigger advantage of 28 points to their nearest challengers.

It was a mixed weekend for Foster –  a stunning last-gasp pole position on Saturday morning didn’t translate well come the afternoon as the 15-year-old could only salvage a single point amid a flurry of off-track excursions.  A good recovery drive from 10th on the grid to fourth in race two went some way to limiting the damage before a fierce effort in the final race of the weekend saw him net second place and his fifth podium finish of the season. 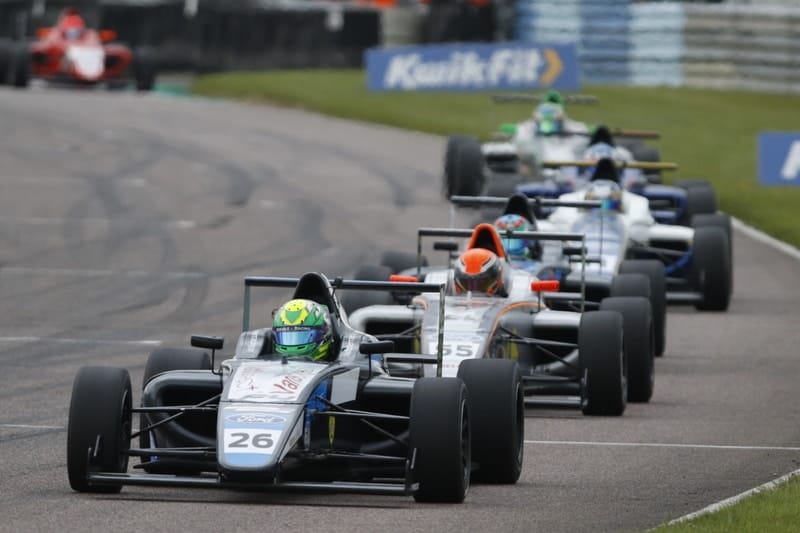 That second place could well have been the race win, Foster was just two tenths shy of winner Zane Maloney at the checkered flag.

“I think one more lap and we might have had a chance – we pushed a bit too late,” Foster explained. “I found pace in the car and the track about three laps from the end which I probably should have found seven laps from the end.

“I struggled at start of the race with Tommy [Foster]; I just couldn’t get past him which kind of hindered my race a lot and allowed Zane [Maloney] to get away.”

His team-mate, Sebastian Alvarez, enjoyed a more successful weekend, recovering from a technical issue in qualifying to securing fifth place in race one and two further podium finishes. He held reverse-grid pole for race two but was unable to match the fast-staring Maloney, ultimately settling for second place whilst pulling off a sensational charge through the field from ninth in race three to claim the final spot on the rostrum.

As a result, his decent points haul means the Mexican has reduced the title deficit to Foster to just five points and jointly holds the record for the most podium finishes so far with his team-mate and Maloney at five apiece.

Reema Juffali continues to show remarkable progress in the third Double R machine as she pushes for more speed. The 27-year-old, who is Saudi Arabia’s first female racing driver, was unlucky not to score a points finish at Thruxton as a retirement in race one after an incident with Mariano Martinez took her out of contention early on, and also meant she would have to start race two from the back row of the grid.

Misfortune would strike again, however, as a front-wing failure led to an unwanted pit-stop in that second race – leading Juffali to wind up last of the runners in 13th and a lap down on winner Maloney.

She fared better in race three, taking advantage of chaos ahead of her to record her best finish of the weekend in 11th and just missing out on the final points-paying position.

If ever there was a weekend Carlin needed to excel at, Thruxton was it. Nothing but sheer bad luck had prevented either of the Carlin rookies, Zane Maloney and Joe Turney, from picking up a race win in any one of the first six rounds – both drivers have consistently been at the sharp-end of the grid.

Maloney enjoyed a weekend he could only dream of, picking up podium finishes – overall victory in two of them – in all three races and claiming the £5000 Ford Super Rookie award, presented by the engine supplier to the first Rookie Cup entrant to win a race outright in the season.

The Barbadian cited a poor getaway from the line as the deciding factor for not being able to win race one, where he finished just nine tenths behind winner Luke Browning.

Determined to make amends, the 15-year-old pored over the data with his Carlin team overnight and came back on Sunday morning with a brand-new plan of action.

“I did not have a good start [on Saturday]; I lost two places so I showed everyone today,” explained Maloney after his race three win. “We went back and looked at the video, everything we needed to do and came out and showed what we were working on.”

Identical overtakes off the line and through Allard and Campbell in races two and three propelled Maloney in to the lead. He felt at ease on the way to his maiden win, cruising to victory with a healthy 4.6 second gap to Alvarez in second.

Race three was a little less comfortable, a late charge from Louis Foster saw Maloney having to defend his win and take the flag by less than a second.

His stellar weekend means Maloney now occupies third in the drivers standings and has thrown himself well and truly back in to the title fight as he trails Alvarez by seven points and Foster by 12.

Joe Turney was unable to emulate his team-mates success, though. Qualifying fourth marked a strong start to the weekend but a slow start to race one meant the 2018 X30 British karting champion dropped back and ultimately finish in sixth place.

A spin at Club on the penultimate lap of race two dropped the 17-year-old even further down to finish ninth before a recovery drive in race three was curtailed by a five-second time penalty for jumping the start, rounding off a frustrating weekend in eighth.

Arden also left Thruxton with a mixed bag of results. Whilst points finishes were consistent across the board, contact and damage in two of three races hampered the Banbury-based team.

Bart Horsten enjoyed the most success of their three drivers. A pacy drive in race one elevated the Australian from eighth on the grid to fourth place, just three tenths shy of the podium. He then went one better in race two to secure that third place and split the Double Rs.

The 16-year-old then closed out the weekend with eighth in race three, allowing him to leapfrog Luke Browning into fourth in the championship standings.

Tommy Foster looked set for a strong weekend early on – a lightning lap early in qualifying looked to guarantee him pole position until improvements from Maloney and namesake Louis Foster dropped him to third.

Race one didn’t go his way however, the Brit settling for seventh place after a lacklustre opening few laps. The second race brought no redemption either, an ill-fated step on the brakes attempting to overtake Josh Skelton sent Foster careering into the back of Browning – necessitating a pit-stop for a new front-wing. He would eventually finish 11th and out of the points.

Foster then started race three from seventh and climbed the order to equal his season-best result of fourth.

Alex Connor couldn’t catch a break all weekend. The consistency was there as he achieved points finishes in all three races but drama on-track would relegate him to the lower echelons of the top ten. The 15-year-old had to take evasive action in the opening race to avoid team-mate Horsten, muting any charge through the pack he had planned as he wound up ninth.

Connor’s best result of the weekend came in race two, he kept his car out trouble and capitalised on the carnage ahead to record a seventh place finish.

Contact with Mariano Martinez at the chicane on the final lap of race three sent the pair spinning, Connor able to recover to salvage the final point in 10th place.

The JHR duo of Josh Skelton and Carter Williams continued to challenge those ahead of them at Thruxton but luck was in short supply for one half of the garage. Despite being disappointed with how qualifying went, P5 and P7 respectively laid the foundations for what had the potential to be a good weekend.

The opening round was one of contrasting fortunes – Skelton recorded his second visit to the podium as he bagged third place but a run-in at the final chicane for Williams pushed the American way down the order to 11th, and to a bitter nul-points.

Williams’ weekend saw no upturn as the American was pitched into a spin early in that second race – he salvaged what he could to scrape together 10th place and the final point.

Race three was the team’s best joint result of the weekend. Fifth and sixth, Skelton leap-frogging Williams, closed the weekend with the team chasing Arden for third in the Teams Cup, just 18 points adrift.

Luke Browning‘s weekend was one of peaks and troughs. The sole Richardson Racing entrant’s best time in qualifying was less than three tenths off pole position but thanks to the minuscule margins this series is renowned for, he would start race one from sixth.

That would mean nothing however as, akin to his Brands Hatch-masterclass, Browning would sweep the pack on the opening two laps to take the lead and overall victory.

A similar result was on the cards in race two until Browning was wiped out by the out-of-control Tommy Foster. A missing rear-wing was too much for the Cestrian to handle and a lengthy pit-stop to fit a replacement dropped him to 12th and a lap down.

A mistake in race three led to Browning making an uncharacteristic spin from which he rejoined the track in 12th place but the Ginetta Junior graduate’s strong pace was ever present as he managed to recover to ninth at race end.

The Fortec pairing of Roberto Faria and Mariano Martinez have displayed consistent flashes of brilliance to continuously score points this season and Thruxton was no exception.

Faria’s 11th spot on the grid for race one was duly converted to seventh at the checkered flag whilst Martinez was unlucky and forced into an early retirement after contact with Juffali from the last two spaces on the grid.

Race two delivered their best results of the weekend. Both cars scythed their way through the field – Brazilian Faria taking sixth place and collecting eight points along with it. Martinez made significant gains as the 15-year-old vaulted from 12th on the grid to eighth.

That was their lot unfortunately, as separate issues in race three denied both drivers another top ten finish. Martinez was lucky to survive the final chicane contact with Arden’s Connor to cross the line 11th whilst front-wing damage for Faria led to a pit-stop for repair works.

The weekends results have closed the title battle right back up again. Louis Foster’s lead has been cut to just five points with Carlin now pressuring the Double R team up front. Expect positions to change with the close margins up and down the championship table.

Meanwhile, Zane Maloney has leapt forward atop the Rookie Cup standings – creating a 29-point cushion to team-mate Turney and a 59-point buffer back to Faria in third.

The championship now prepares to head north to Croft, with a rejuvenated title battle, on the 15/16 June.

By Nigel Chiu
6 Mins read
Nigel Chiu takes a look at all of the key talking points from a tense World RX of Latvia, which saw plenty of strategy games amongst all of the leading drivers.
24 Hours of Le MansFeaturesFIA WEC

By Alice Holloway
3 Mins read
The final six hours of the 24 Hours of Le Mans offered up chaotic racing, with the class leaders decided in the final stages of the race.
F4 British Championship

By Matt Jeffray
2 Mins read
James Hedley takes dominant race three victory at Thruxton to take a clean sweep of this weekend’s action and firmly put his name back in contention for championship honours in this years British F4 Championship.