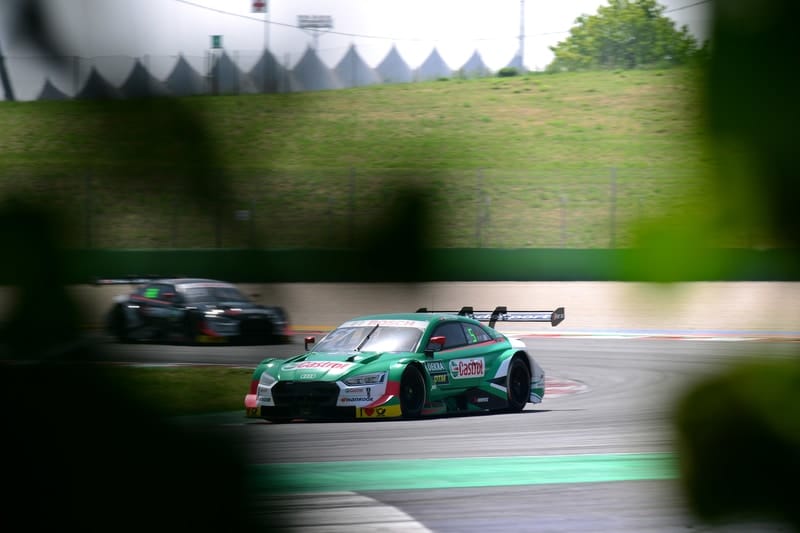 Audi‘s Nico Müller claimed his first victory of the 2019 DTM season in the second and final race of the Misano weekend, ahead of the lead BMW of Philipp Eng.

Müller’s lightning start from fourth, and an unfortunate puncture for team-mate René Rast, allowed the Swiss driver to take victory by 7.6 seconds from Eng and move up to third in the Drivers’ Championship.

Rast recovered from his puncture a third of the way through the 55-minute, 38-lap race to take third place and maintain his championship lead.

Polesitter Rast suffered a difficult start and came under immediate attack from the three Audis that started directly behind him, Robin Frijns and Müller assuming the lead and second place respectively.

Rast then was involved in a race-ending collision for Race 1 winner Marco Wittmann at Turn 8 just seconds later when sandwiched between the BMW and Audi team-mate Jonathan Aberdein – who had adventurously dived down the inside of Rast in a bid for third – leading to contact between Rast and Wittmann and an early retirement for the two-time champion.

The chaos behind allowed the leader Frijns to pull out a healthy 1.8s gap to Müller in the first six laps, but the Dutchman found himself being reeled in by his fellow Audi in the coming laps as the tyres started to fade in the searing Italian heat.

The close battle between the leading pair allowed Rast to close in and pass Müller and Frijns on lap 10, with Müller then following the 2018 champion through into second.

A tough lap for Frijns was compounded by a collision with team-mate Loïc Duval at Turn 5, relegating the former to seventh, behind Joel Eriksson, and earning the Frenchman a drive-through penalty.

Duval wasn’t the only driver keen to make up for an average qualifying, with Eng continuing his progress from ninth on the grid by passing Aberdein for fifth with the help of DRS on lap 13 – before diving in for fresh tyres a lap later than Eriksson and Aberdein.

Rast’s puncture, picked up from attacking the sausage kerbs situated on the astroturf, fortuitously happened close to the pitlane – but relegated him towards the lower end of the top 10 and in close proximity to Eng.

And it was Eng who made one of the moves of the race on Rast at the right-handed hairpin of Turn 10 for fourth place, forcing Rast into running deep into the corner before switching back to the inside to complete the move.

The long-running Jake Dennis and Duval’s pitstops cleared up the picture at the top, with Müller reclaiming the lead by way of an easy pass on the Aston Martin at Turn 8 – Dennis offering little defence.

Although too late for a podium charge, Frijns completed his credible comeback drive with a bold pass on Audi stand-in Pietro Fittipaldi at the fast Turn 11 for fourth.

Eriksson emerged as the winner in the battle for sixth between himself and Aberdein, completing a wonderful move around the outside of Turn 10 to end an almost race-long duel between the two.

MotoGP star Andrea Dovizioso had been set for a very strong end to an impressive DTM debut weekend, but a late spin dropped him to last of the 15 finishers.