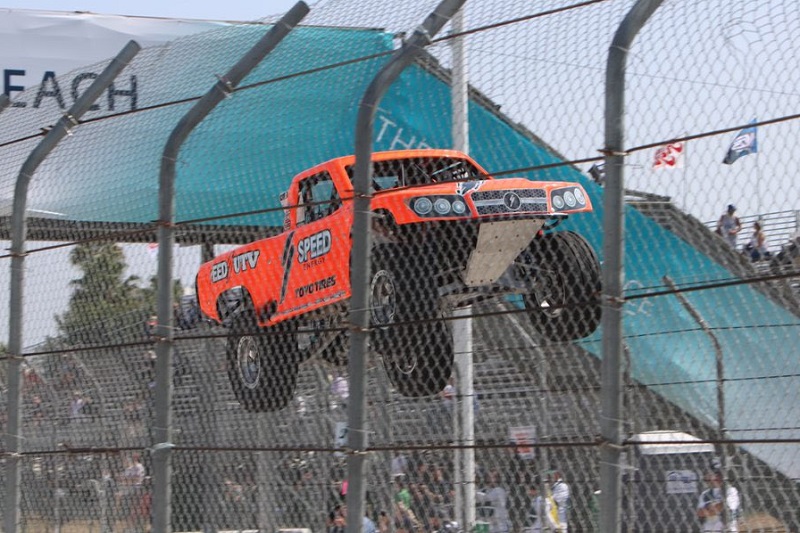 For the first time since the 2019 season finale at Gold Coast, Matt Brabham is not the Fastest Qualifier for a Stadium Super Trucks weekend. Instead, Robby Gordon led the thirteen-driver grid in Friday’s practice/qualifying session at the Acura Grand Prix of Long Beach, enabling him to end Brabham’s streak at five.

Gordon, a three-time winner at Long Beach, notched his third Fastest Qualifier at the street circuit with a best lap time of 1:44.521. He previously accomplished it in 2016 and 2018, both of which saw him score runner-up race finishes.

Jerett Brooks and Brabham were the only other drivers to finish with times faster than one minute, forty-five seconds at 1:44.833 and 1:44.929, respectively. Brabham has also won thrice at Long Beach while Brooks’ lone Long Beach start in 2014 saw him finish tenth. The top three times would have crushed the most recent Long Beach qualifying runs; in 2019 (the 2020 race was cancelled due to COVID-19), pole winner Sheldon Creed set a time of 1:45.072.

In fourth was Robert Stout, who is coming off his maiden SST win at Nashville ahead of Jacob Abel, who notched a runner-up in Stout’s winning race. Stout’s 1:45.334 placed him within a second of Gordon while Abel’s 1:46.940 lands him in the top five after qualifying ninth in his début a round prior.

Sixth- and seventh-fastest were a pair of Baja Jerky-sponsored drivers in SST newcomer Christian Sourapas and Max Gordon. Both set times in the 1:48 range.

“Qualified P6 out of 13 trucks! Still have a lot to learn but I’m super happy with my spot,” wrote Sourapas in an Instagram Story. The baja racer posted earlier in the day that “these things are so tough to drive. But an insane amount of fun!”

A trio of Crosley Brands trucks rounded out the top ten with Jeff Ward, who finished eighth in the 2013 Long Beach race, leading the way. Mads Siljehaug and Brandon Parrish, both making their SST débuts, tailed their team-mate.

“From Norway to Long Beach,” began a Facebook post by Crosley CEO Bo LeMastus, “Mads has had a good day one !”

Parrish said on Instagram, “What a day! Only practice, BUT man, what a day! Tomorrow morning is Race 1. Thanks to @crosleysports @bolemastus for the ride!!”

LeMastus was twelfth. Sandwiched between Parrish and LeMastus was Zoey Edenholm, who will run her first weekend of the season after making her first start at Road America in 2020.

Bill Hynes closed out the order. He quipped in Spanish on social media, “como se dice saco de arena”, which translates to “How do you say sandbag?”.