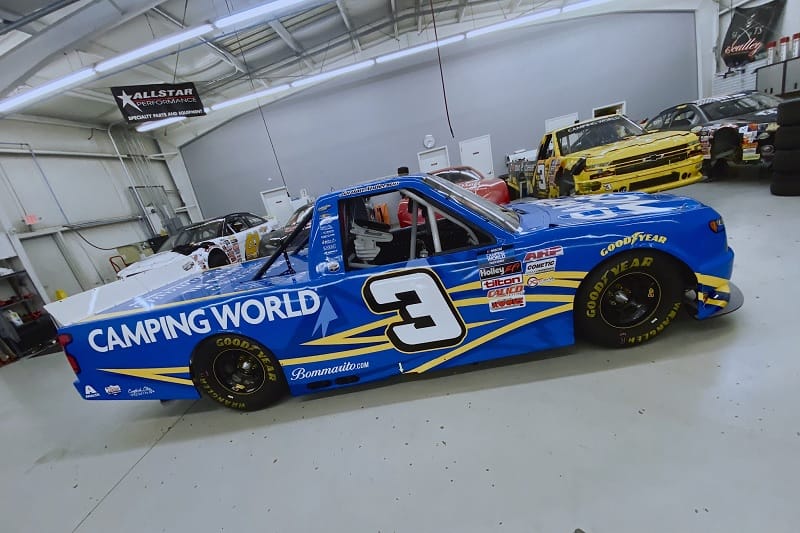 Marcus Lemonis is one of NASCAR‘s biggest supporters. His Camping World company provides title sponsorship of the sanctioning body’s third tier, dubbing it the Camping World Truck Series, and his brands have also been involved in the sport across both national and regional series. However, the CEO has bigger plans for the Truck Series’ Bucked Up 200 at Las Vegas Motor Speedway on Friday: a quarter of the grid as ten drivers have confirmed blue-and-yellow Camping World liveries.

Lemonis has held the Truck Series’ title sponsorship since 2009, with subsidiary Gander Outdoors previously providing naming rights in 2019 and 2020 before reverting to Camping World branding in 2021. Camping World has also sponsored various drivers and races across the three national series, such as appearing on four-time Truck champion Ron Hornaday Jr.‘s vehicles in the late 2000s. Although Camping World did not appear on a car or truck from 2018 to 2020, it made its livery return with Cup Series driver Daniel Suárez during his series’ race last Sunday at Homestead.

In the week leading up to the Vegas race, with numerous drivers unsponsored, Lemonis announced on Twitter that Camping World would sponsor any interested truck. Each sponsorship would provide varying levels of funding depending on how the driver performs in Friday’s race, with a base $15,000 that increases to $25,000 for a top-ten finish, $35,000 for a top five, and $50,000 for a win.

The mass sponsorship began with Grant Enfinger, who found himself relegated to a part-time 2021 Truck schedule, despite four wins and a Championship Round appearance the previous year, in the #98 ThorSport Racing truck shared with Christian Eckes. With Eckes driving the #98 at Vegas, Enfinger latched on with CR7 Motorsports‘ #9 regularly driven by Codie Rohrbaugh, and Lemonis elected to place Camping World on the truck.

On Monday night, Lemonis tweeted a simple message: “Which @NASCAR_Trucks are unsponsored this weekend? Respond here if you are and if you know of someone get their attention quick”.

Numerous small teams quickly reached out. Jordan Anderson, owner/driver of Jordan Anderson Racing and runner-up in the season opener at Daytona, threw his hat into the ring and got to work on designing a paint scheme early into the following morning.

Another owner/driver Dawson Cram had his #41 emblazoned with Camping World branding after crew chief Brian Keselowski connected with Lemonis.

Parker Kligerman of part-time Henderson Motorsports was notified of the opportunity by friends and fellow drivers Landon Cassill and Conor Daly.

“The logistics between when the truck was ready to leave the shop in Virginia  & getting to NC made this quite the challenge,” Kligerman tweeted on Tuesday night. “We got it done”.

Reaume Brothers Racing will have two Camping World trucks for Jesse Iwuji (#33) and B.J. McLeod (#34). Iwuji took a whimsical approach to his pitch by attaching a Camping World Truck Series logo to his forehead.

GMS Racing team-mates Raphaël Lessard and Sheldon Creed also committed to the plan, with Creed initially expressing worry that his crew could not prepare a wrap in time before ultimately sorting out the matter. Creed will be the highest-starting Camping World truck in second.

Despite being the reigning series champion, Creed’s #2 was mostly blank for the first two races as grandfather Maurice Ortega, who has supported him since his off-road days, provided funding. The sight of an unsponsored defending champion quickly caught many eyes including Lemonis’s, who expressed interest in sponsoring him during the two events.

Tyler Hill‘s #56 Hill Motorsports truck was a last-minute addition to the Camping World “team”. After brother Timmy noted the truck had already left for the speedway when the promotion began, Lemonis was able to coordinate with local business Gecko Wraps to prepare a livery by Thursday.

Lemonis’s presence also extended beyond the real-life track and into the virtual world. On Tuesday, he announced he would provide $100 merchandise certificates to iRacing players who use a Camping World paint scheme in the game during the week.

Other drivers were unable to get a scheme ready for Vegas as they either were already on their way to the track or did not enter, but voiced their desire to do so at later events.

Among fans, Lemonis’s act evoked comparisons to Johnny Morris or a modern-day (and genuine) J.D. Stacy. Like Lemonis, Morris is heavily involved in NASCAR via Bass Pro Shops, which he founded and through which he has supported numerous national series teams. Stacy was a highly-successful entrepreneur whose name graced commonly graced at least five Cup cars in a race in the early 1980s prior to his exit as checks began to bounce. Besides title sponsorship, other projects that Lemonis contributed to included a bounty programme during the 2020 season for full-time Cup drivers who could beat Kyle Busch in a Truck race (which was quickly claimed by eventual series champion Chase Elliott).

Although certainly a feel-good story, it also raises the question about the Truck Series’ economics. Budgets vary but a premier organisation might have to pay up to $3 million, and numerous race-winning teams have suffered losses or been forced to shut down due to sponsorship woes. For example, Cup driver Brad Keselowski ran his own team that won eleven races in their history but folded after 2017 as they was bleeding money, while Red Horse Racing consistently recorded championship-contending seasons with blank trucks until their demise.

Brian Keselowski commented on the matter by noting that although it is “not ideal” that so many drivers need sponsors, Lemonis’s involvement “gives smaller teams on opportunity to show their worth”, especially compared to “the alternative of having no sponsorship & even less exposure because the tv focuses solely on the top 5-10”.

“One of the things, yes it’s a huge deal skewed toward the sponsor, but these teams will also have the opportunity to use this towards looking for new sponsorship too. Any time you have a major corporate sponsor, you can parlay that into interest towards others.”

“It’s well below market value but honestly it doesn’t matter,” he added in another tweet. “Any good businessman will take the opportunity to take a good deal like this and make the most out of it. Truck series is a good series, but needs some more funded teams. This gives teams an opportunity to showcase”.

Fox’s Cup Series play-by-play commentator Mike Joy issued his condolences to Truck counterpart Vince Welch and added, “Think about how hard it will be on the spotters:  “It’s the blue truck with yellow stripes… not that one, the other one… no, the other one… … …  … you okay? Will it crank?” relief that”.

“Not quite sure what all those @CampingWorld trucks will look like,” Welch responded, “but I can’t wait to call it Friday night, adding it to the list of unique & memorable experiences!”

UPDATE (4 March): Despite not planning to take part due to timing concerns, Hill Motorsports will indeed have a Camping World scheme for Tyler Hill’s truck.

By Justin Nguyen
2 Mins read
Brian Brown, a five-time champion at Knoxville Raceway, will make his NASCAR Truck début for Kyle Busch Motorsports when the series heads there in July.
NASCAR Truck Series

By Justin Nguyen
3 Mins read
Martin Truex Jr., who won Martinsville last week, will lead the NASCAR Cup field to green at Richmond. Ben Rhodes will do the same for the Trucks.