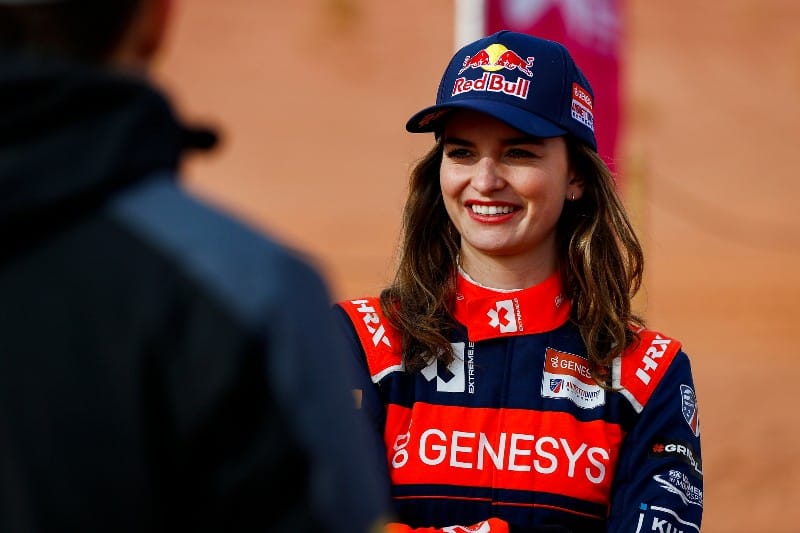 Catie Munnings mainly cut her teeth in rallying, but she can now add rallycross to her résumé. On Thursday, Munnings announced she will make her rallycross début in the FIA RX2e Championship at the World RX of Sweden in Höljes Motorstadion on 1–3 July.

After rising through the ranks in the European Rally Championship and making a one-off in the World Rally Championship, Munnings is currently a mainstay in Extreme E. She drives for Andretti United XE alongside Timmy Hansen, a rallycross star who won the World Rallycross Championship Supercars (predecessor to the current RX1e) in 2019, and the duo finished the 2021 season third in the championship with a win at the Arctic X Prix. Andretti XE placed seventh in the 2022 opener in Saudi Arabia after failing to finish their Semi-Final race.

Munnings explained it is “very exciting to be a part of the first race, at the iconic circuit of Höljes. It’s something completely new for me; I’ve been racing electric in Extreme E, but nothing like this. I was so surprised by the speed you have when you first accelerate and the torque you have. It will be a big challenge for me. But I don’t have big expectations. I’m here to develop and to progress. I want to get more side-by-side experience as a driver. The guys are really quick, so I can’t wait to be there on the start grid and hopefully learn as much as I can from them.

“The RX2e car is so simple to drive: no gears, no clutch, no things to worry about as a driver. But then it has its challenges because you have to think about the regen bias and you can adjust the torque on each axle and how much the car pushes. It all changes completely, so you can have a totally different car at each race location. This will be a huge challenge for me since I don’t have experience of the rallycross tracks or this car so I would rely a lot on what the RX2e engineers tells me. But that’s part of the game and it’s the same for everybody when they start something new.”

Although Extreme E is not a rallycross series, it enjoys much crossover with World RX in their driver rosters. Hansen and his brother Kevin are regulars in both, while current XE points leader Johan Kristoffersson is a four-time World RX champion. Klara Andersson of XITE Energy Racing is contracted to race in World RX’s RX1e class for 2022, while her XE team-mate Oliver Bennett also has experience in the series. Timo Scheider doubles as both a World RX racer and Extreme E course advisor.

The all-electric RX2e class, which serves as the feeder division to RX1e, is in its second season of operation after succeeding the traditional powered RX2. The inaugural campaign in 2021 saw three other Extreme E drivers take part in Andersson, Christine GZ, and Laia Sanz. RX2e cars are built by QEV Technology and Olsbergs MSE, the former of which allied with ACCIONA | Sainz XE Team ahead of Extreme E’s own maiden season last year.

“The FIA RX2e Championship prides itself on its distinctive arrive-and-drive concept, giving racers an unrivalled opportunity to get behind the wheel of high-performance machinery and climb the rallycross pyramid,” stated RX2e manager Javier Alonso. “Catie’s participation in Season 2 will be another indication of this accessibility, and we are eager to see how well she can adapt to the pressures of international rallycross. Her off-road experience and exceptional car control will be put to the test, and I’m sure fans will be excited to see how she stacks up on our fiercely competitive field.”

By Justin Nguyen
1 Mins read
Nico Rosberg has not done much race car driving since retiring in 2016, but he found a chance to return to the driver’s seat with his Extreme E team Rosberg X Racing during testing.
Extreme ENitro RallycrossShows and Events

By Justin Nguyen
4 Mins read
The electric Extreme E and Nitro Rallycross Group E will be represented at the Goodwood Festival of Speed as Andretti United and Veloce bring their ODYSSEY 21s and XITE Energy Racing shows off the FC1-X.
Extreme E

By Justin Nguyen
2 Mins read
With testing right around the corner ahead of the next Extreme E race in Sardinia, Christine GZ has been deemed medically fit to return to racing after breaking her foot in Saudi Arabia.