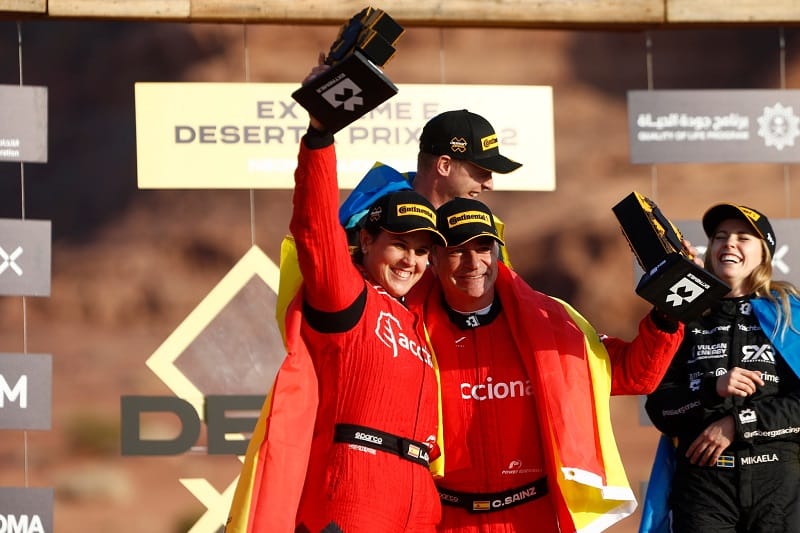 As two-wheeled master Laia Sanz continues her transition into four-wheel competition, she plans to use rallycross to her advantage. On Wednesday, she announced plans to run multiple races in the FIA World Rallycross RX2e category with the aim of developing her four-wheel skills for her Extreme E championship pursuit.

A full itinerary was not immediately revealed, though she had hoped to début in the season-opening World RX of Sweden in Höljes, which was to take place a week before Extreme E’s Island X Prix in Sardinia before being cancelled due to logistical issues. None of the six dates on the revised World RX calendar interfere with Extreme E, leaving her with plenty of options depending on her personal schedule.

Sanz first dabbled in RX2e at the 2021 World RX of Benelux in Spa-Francorchamps. She was one of three women racing in the event alongside Christine GZ and Klara Andersson, both of whom are also Extreme E colleagues. Catie Munnings, another female Extreme E competitor, intends to race in the 2022 RX2e season.

“I enjoyed a lot of last year’s race I did at Benelux World RX of Spa-Francorchamps,” said Sanz. “It was so fun and provided me a good lesson, especially because I’m no used to fight with other cars and side-by-side.

“Last year I did a bad start, then I found myself struggling at the back. The grid is diverse and fierce. This year, hopefully I can do much better. The main goal is to learn and to get experience. My participation in some rounds of this year’s RX2e season will bring me more training and help me prepare the next Extreme E races.”

Although Extreme E’s Spark ODYSSEY 21 and the RX2e car are completely different vehicles save for their electric status, the frenetic pace of rallycross events and the ease in driving such a car has proven crucial for honing one’s skills. Sanz compared the RX2e to a kart, explaining a driver can “set-up and play with its configuration. It’s so easy to drive, a good and fun tool for me to learn.”

RX2e manager Javier Alonso regarded her arrival as a “significant endorsement for our cutting-edge series, with world-class drivers such as Laia looking to get behind the wheel and prove their ability against our existing field packed full of promising young talent. […] It is fantastic to have Laia at the FIA RX2e Championship field for several rounds of the season. She is exactly the profile of driver this series is designed for.”

Sanz and her ACCIONA | Sainz XE Team, where she is joined by Carlos Sainz Jr., is off to a strong start in 2022 when they finished runner-up in the Desert X Prix to reigning champion Rosberg X Racing. The run was the duo’s second podium after placing third in the 2021 Arctic X Prix; they finished that year fifth in points.

Woolridge to make rallycross debut in Hell in RX2e

By Justin Nguyen
2 Mins read
Extreme E invited four female Student Ambassadors to the Island X Prix doubleheader week to gain experience working with the series. They will also join the championship for the final two races of the 2022 season.