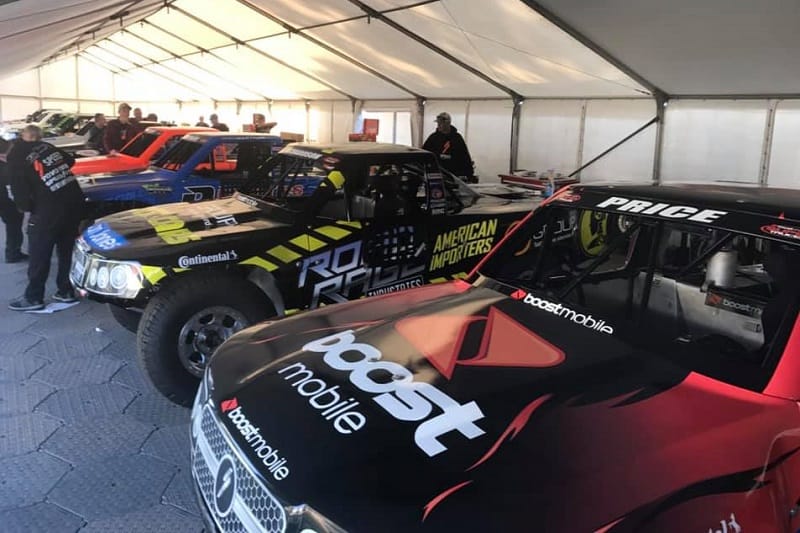 With the 2020 Speed Energy Stadium Super Trucks/Boost Mobile Super Trucks season opener in the Adelaide 500 right around the corner, twelve drivers will duke it out. On Thursday, the series released the entry list, featuring familiar faces and newcomers alike.

Of the twelve drivers, three ran the full schedule in 2019: series founder Robby Gordon, Matt Brabham, and Bill Hynes. Brabham scored a series-high five wins in 2019 as he beat Gordon to the series title by 54 points, his second in a row. Gordon, the 2013 and 2014 champion, recorded three wins. Hynes was sixth in the 2019 standings; in the season finale at the Gold Coast 600, he finished third for his first podium since winning the 2018 kickoff at Lake Elsinore Diamond. After racing in his blue #57 UFD Racing truck in 2019, Hynes will open 2020 with a Continental Tire livery. The tyre manufacturer became an SST partner a year ago as drivers like off-road racer Ryan Beat and Christopher Polvoorde, sports car driver Ryan Eversley, and NASCAR‘s Greg Biffle and Sheldon Creed spent time in a Continental truck.

Joining Gordon and Hynes in representing the United States will be Sara Price. The first female driver in series history when she ran nine races in 2016 and last competing in 2017, the motocross rider will run the #78 VP Racing Fuels truck. Gavin Harlien, who finished third in points, raced with VP sponsorship in 2019.

“I got a last-minute call from Robby to do this,” Price explained in an Instagram story. “First time in Adelaide. Last time I raced these was in Lake Elsinore and then Gold Coast.”

Besides Brabham, eight drivers of Australian blood will race the trucks. Earlier in the month, retired Paul Weel, who last raced in the Supercars Championship in 2008, announced his return to racing with the trucks; he will pilot the #50 at Adelaide. 2017 SST champion Paul Morris and Paul Morris Racing Academy member Luke Vanna have partnered under the Team Norwell banner, while series veteran Greg Gartner and Super2 Series racer Shae Davies are in the #410 and #88, respectively. Two-time Dakar Rally champion Toby Price, who has raced in SST since their arrival in Australia in 2015, makes his return in the #87. Queensland native Shaun Richardson will be in the #12, running his first races in the trucks since 2017.

Perhaps the biggest return story is Matt Mingay in the #2 Hot Wheels/Castrol truck, racing for the first time in four years. Mingay raced in SST from 2015 to 2016, during which he scored two podiums and a win at Gold Coast in the former. In SST Race #2 of the 2016 Detroit Grand Prix, he was involved in a wreck that left him with serious facial injuries, including memory loss and jaw reconstruction. Although the stuntman attempted to make a comeback with the trucks at the 2017 Adelaide 500, he was not medically cleared to do so. Three years later, he finally received clearance to race from Motorsport Australia on Monday.

The Adelaide 500 weekend will consist of three races on Friday, Saturday, and Sunday, including a shootout on Saturday. It is the first of three co-sanctioned races between the American Speed Energy Stadium Super Trucks and Australian Boost Mobile Super Trucks, with later dates scheduled for the Perth SuperNight in May and Gold Coast in late October.

By Justin Nguyen
1 Mins read
In a session shortened from 20 to 13 minutes, Paul Weel and Paul Morris were the fastest in the Boost Mobile Super Trucks’ Darwin practice.
Stadium SUPER Trucks

By Justin Nguyen
2 Mins read
Trav Milburn, who raced in the Stadium Super Trucks from 2016 to 2018 and exclusively at Adelaide or Perth, will make his return to the series at Darwin next weekend.