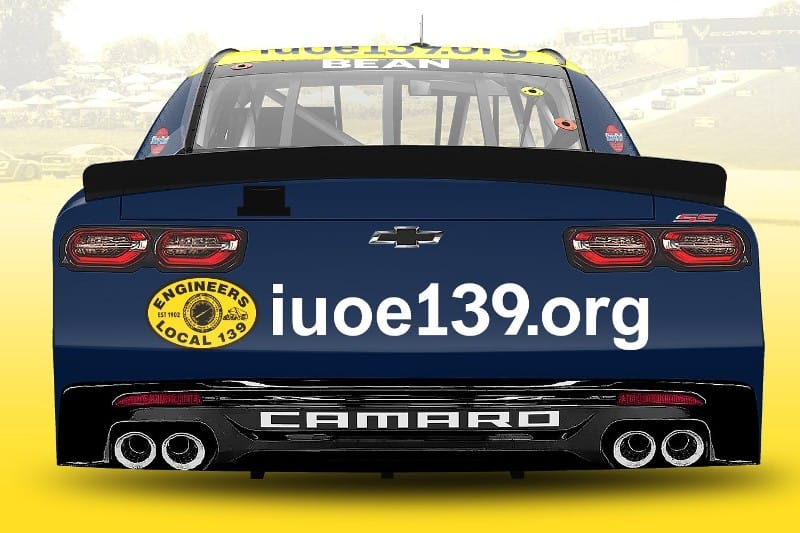 Dexter Bean only has two NASCAR road course starts to his name, both of which came in his home state of Wisconsin. On 2 July, that number increases by one as he enters the Xfinity Series race at Road America. Operating Engineers Local 139, a Wisconsin-based trade union for heavy construction machinery operators including Bean and his family, will serve as sponsors of his DGM Racing car.

“Combined with my father David Bean and grandfather Richard Bean, we have over 108 years of membership (in Local 139),” commented Bean. “Construction is our family tradition. On any given weekday, I can usually be found in a machine, so being able to combine racing and my daily life in construction makes this car and partnership with IUOE Local 139 very sentimental to me. It’s truly an honour to represent them.”

Bean, whose hometown is on the other side of the state from Road America in Elkhart Lake, finished twenty-sixth and thirty-second in his two starts there in 2017 and 2019. Outside of those two races, his lone other major road course start came in the ARCA Menards Series when he was fourteenth at New Jersey Motorsports Park in 2008.

His other thirty Xfinity starts have come on ovals, all but one of which are for DGM Racing. He has driven for the team since its inception as King Autosport in 2015, with a best finish of eleventh at Pocono in 2020. DGM owner Mario Gosselin is a brother-in-law of Bean.

“Internal combustion engines, horsepower, and the skill to control them are all part of an operating engineer’s everyday life, so naturally, a great amount of our members love to follow the NASCAR circuit,” said Local 139 president Terry McGowan. “That is why we are proud to announce our sponsorship of one of our very own who displays these very skills on the track. Brother Dexter Bean, a third-generation member, will now carry the logo of the Operating Engineers Local 139 on the track, and it will instill pride in each and every fellow member who sees his machine and his skill on display for all.”

The 35-year-old has also raced in the Camping World Truck Series and Cup Series.

DGM fields the #36, #90, #91, and #92 for multiple drivers, with the #36 and #92 being full-time vehicles. While Alex Labbé is in the #36 for the bulk of the schedule and Mason Massey in the #92, each car have been split between many names including Josh Bilicki, Ross Chastain, Mason Filippi, Preston Pardus, Garrett Smithley, and Kyle Weatherman.